302Lifestyle of the immigrants

This diorama recreates how the lifestyle influenced by immigrants may have appeared. 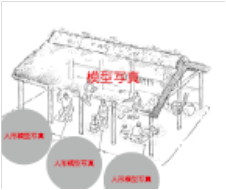 Kitchen
People lined the bottom of a steamer with a slatted board, on which they placed grain or other foods, and set this on top of a pot of water placed over a fire for cooking. Rather than having rice alone, they evidently mixed in various grains such as foxtail millet, Japanese millet, or barnyard millet as well. There appears to have been many other ingredients in their diet, such as barley, wheat, and beans, plus vegetables such as turnips, lettuce, and parsley, as well as mushrooms, nuts, fruits, seaweed, deer and boar, wildfowl, and fish. 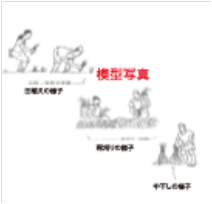 Making iron implements
Iron products were made by casting, by pouring molten metal into a mold to create a desired shape, and also by forging, pressing or pounding the heated iron to strengthen and shape it. Iron is thought to have been widely used for tools designed for irrigation work and farming. 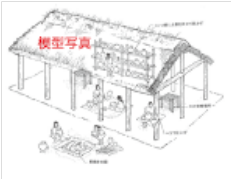 Growing rice
During the Yayoi period, rice was grown by directly sowing seeds in a rice paddy, and harvested by plucking only the tips of the stalks. In the Asuka period, rice seedlings were transplanted in the paddy, and stalks were cut at the base. It is thought that developments in iron farming equipment brought about these changes in rice cultivation. The cut stalks were used to make straw sandals and raincoats. 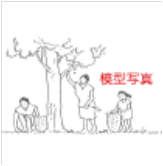 Making pottery
Asuka period ceramics consisted of Haji ware, which developed from pottery of the Yayoi period, along with Sue ware, made with technology introduced in the Kofun period. Haji ware is a reddish, soft earthenware made on an open fire. The pots and fuel were placed in a shallow pit dug on level ground and the fire was lit.

Gathering nuts
Fruits that grow naturally in the fields and hills, such as pears, prunes, peaches, plums, loquats, Tachibana oranges, candleberries, and persimmons, along with nuts such as chestnuts, chinquapins, nutmegs, yews, and walnuts, were collected by women and either eaten raw or dried as preserved food. Acorns, in particular, were consumed as a supplement when staple foods were in short supply.

Dwellings
Two types of house are thought to have been used, one being the “pit-dwelling” in use from the Jomon period, with the floor at a level dug down from the ground surface on which pillars were stood for supporting the roof, and another called an “embedded-pillar building,” which used the natural ground surface as the floor, on which pillars were erected and connected with walls. In both types the pillars were in fact erected by digging a hole down from the floor level. In one variant of the embedded-pillar building the walls were completely plastered over so that the pillars were not visible.

History of studies and research on Kitora Tumulus
201It all began with word from a local resident.
202The inside of the stone chamber is investigated without excavating.
203Researchers lay their eyes on the murals for the first time.
204The challenge is how to protect murals that would disintegrate if left as they are.
205A photo map of 1,200 images is created.
206First, new methods must be devised.
207The daily challenge of handling the thin plaster.
208Unraveling Kitora's mysteries from surviving materials.
209The murals' beautiful appearance is restored using modern technology.
210The tomb returns to its quiet sleep.

Immigrant culture and ancient Asuka
301Who were the immigrants?
302Lifestyle of the immigrants
303The first immigrant to settle in Asuka was Hinokuma no Tami no Tsukai Hakatoko.
304The remains of a foreign lifestyle are visible at the Hinokuma site group and environs.
305Hinokuma temple is thought to have been the temple of the distinguished immigrant family, Yamato no Aya.